Take a video tour of the Old Brewhouse

Visitors to Tumwater frequently ask about the Old Brewhouse of the Olympia Brewing Company, which is seen by thousands everyday as they travel Interstate 5 through Tumwater. After the 2016 donation of the brick tower to the City of Tumwater, tours of the complex have been restricted in the interest of safety during renovation stages.  Residents and visitors want to visit this important site and learn more about the Old Brewhouse, so the City of Tumwater, the Olympia Tumwater Foundation, and Thurston Community Media partnered to produce a video tour of the old brewery. 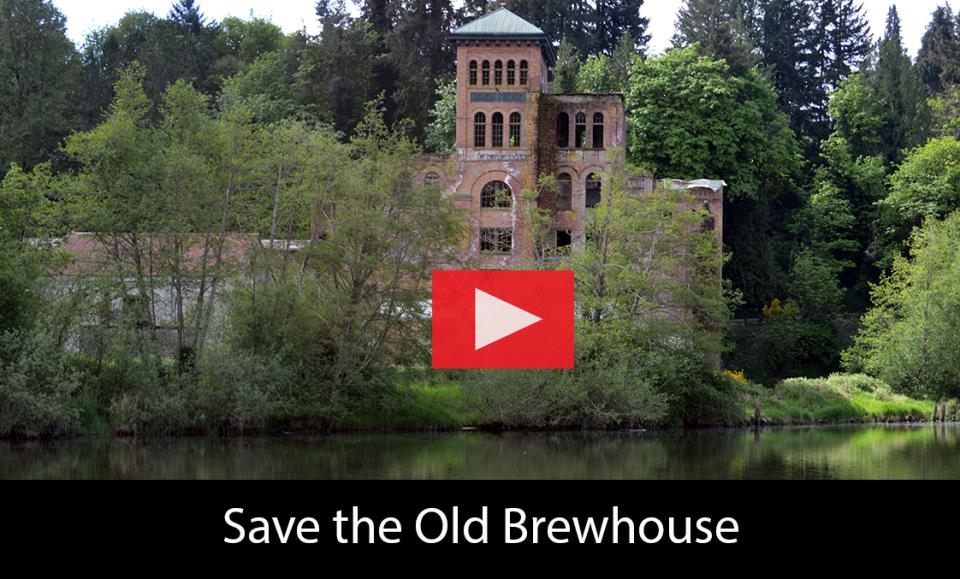 This 8-minute tour of the old Olympia Brewing Company complex is hosted by former Olympia Brewmaster, Paul Knight.  The video provides viewers with an overview of early Old Brewhouse history, explores stories about the founding Schmidt family, describes the creation of the famous “It’s the Water” slogan, and explains turn-of-the-century brewery operations and the huge impact it had on the surrounding community, which is still felt today.

German brewmaster Leopold Schmidt chose a site at the foot of the Tumwater Falls on the Deschutes River,  for his new brewery. The location offered access to saltwater shipping, electrical power produced by the Falls, and most importantly, artesian springs of pure water that he deemed perfect for brewing beer. He built a four-story wooden brewhouse, and in 1896, began brewing and selling beer. In 1906, Schmidt replaced the original building and constructed the "Old Brewhouse." The six-story structure with elegant arches and a copper roof with Tenino sandstone trim was designed by The Vilter Manufacturing Co. of Milwaukee, Wisconsin, and built with red Chehalis brick. Sandstone for the foundation was brought in by wagon from a rock quarry at Tenino. Lumber from the areas of Hewitt and Wards Lake, four miles to the east, was brought to the construction site by six-horse team. Sand and gravel was hauled in by scow from Mud Bay spit and Tykle's Cove.

Once the manufacturing site for Olympia Brewing, brewing operations were halted in 1916 when Prohibition was enacted in Washington State - four years before national Prohibition began. The Old Brewhouse has long been associated with the Olympia Brewery and the Schmidt family,  the community's largest private employer for a significant part of the past century.

The importance of the structure was recognized in 1978, when the property was placed on the National Register of Historic Places. In the mid-1990s, the City adopted special zoning and shoreline designation for the Old Brewhouse to encourage its preservation and redevelopment. Over the years, the Old Brewhouse fell into disrepair. In 1995, it was named to the the Washington Trust for Historic Preservation's "Ten Most Endangered Properties List," and in 2003, moved to the Trust's "Endangered Properties List."

Today, the Old Brewhouse stands as Tumwater’s most important architectural landmark. It is a symbol of the crucial role the Olympia Brewing Company played in the history of our community, and the last reminder of the flourishing riverside industries that once formed the heart of this town. The Old Brewhouse influenced the design of dozens of new buildings in the region including Tumwater's City Hall, Fire Station, and the Timberland Regional Library in Tumwater.

On the “Watch List” of the Washington Trust for Historic Preservation, the Brewhouse is at the core of Tumwater’s Historic District.  The City has taken a number of actions designed to protect the Old Brewhouse. These have included adopting Comprehensive Plan goals and policies to "protect designated … national landmarks" and "encourage the development of the Tumwater Historic Commercial Zoning District."  The brewhouse was donated to the City of Tumwater to be preserved and restored in April 2016.

In 2017, emergency repairs were made to the Brewhouse to weatherize and prevent further decay. The work included construction of a temporary roof, window coverings, and other repair measures identified as critical to short-term protection.

Preservation of the Old Brewhouse and redevelopment of the brewery complex has significant historic value, and the potential for economic development in partnership with private investors. Revitalizing this community asset is a City and community priority.