Tumwater is a growing city with a rich history and a small town feel. Founded with a pioneering spirit, and based in equality, this is the oldest American settlement on Puget Sound.

Members of the Bush-Simmons party cut a wagon trail that became the northern branch of the Oregon Trail, arriving at Tumwater Falls in 1845. Originally called New Market by American settlers, the area soon became known as “Tumwater,” derived from a Chinook jargon word for waterfall.

Following the establishment of a post office in 1863, Tumwater was first incorporated as a town on November 25, 1869. Since its incorporation, the City has grown into a vital and diverse community with thriving neighborhoods, commerce, government, and manufacturing.

The year 2019 marks the 150th anniversary of incorporation as a town. There are several community events and special projects to commemorate the year. Watch for Sesquicentennial events on our Facebook page, or visit the City website. 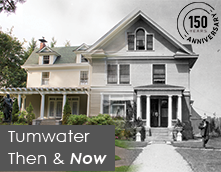 Take a virtual tour of Tumwater and visit places that are significant to the unique history of the city. Discover what each location looked like then and now, through the interactive map, photographs, historic documents, and videos. Discover something new about Tumwater on the City Facebook Residents had a chance to tour two wonderful homes in the Tumwater Historic District as part of the City's yearlong Sesquicentennial Celebration. The Brewmaster’s House and the Crosby House were open one Sunday each month, throughout summer 2019. The City Hall lobby will host mini-exhibits featuring significant historic figures and leaders in Tumwater. Next time you're at City Hall, remember to take a peek through the featured person's biography, photos, and memorabilia. "As We Live, We Grow" | Independence Day Parade

For over 25 years, the City of Tumwater has hosted its Annual Independence Day Parade. The parade begins at 11:00 a.m. on July 4. Individuals and organizations interested in participating in the parade are welcome to contact Tumwater Parks & Recreation at (360) 754-4160 for more information or to receive a parade entry packet. The Tumwater Artesian Brewfest celebrates the legacy of brewing and its importance to Tumwater's history. Visit the City's booth to find information about Tumwater's incorporation, and explore more history at the Olympia Tumwater Foundation's booth. Congressman Denny Heck (WA-10) re-introduced a bill to rename the Tumwater Post Office, located at 200 Israel Road Southeast, to honor Eva G. Hewitt. Heck’s bill would designate the United States Postal Service facility located at 200 Israel Road Southeast in Tumwater, Washington as the ‘‘Eva G. Hewitt Post Office.’’ The bill would require that any mention in any law, map, regulation, document, paper, or other record of the United States properly reference the facility and use the new name.